Aces and Faces is an online video poker game that players can play online for free or for real money. The game itself is based on the classic Jacks or Better video poker game that can be found in many online casinos around the world. In this game, the payouts differ slightly compared to standard video poker. In this version, the paytable has been adjusted to pay out higher on aces and face card combinations. This means that players should focus their game on collecting face cards and aces in order to achieve the maximum payouts. All of the other rules of the game are exactly the same.

The Basics of Aces and Faces

If you have not played Aces and Faces or any other form of poker online, the good news is that the game is really easy to learn. The basics of Jacks or Better video poker are similar to a standard game of 5 card draw. In video poker, players compete against the dealer and not other players. This means that winning is entirely dependent on achieving a high poker hand rather than out betting or bluffing your opponents. In this game, minimum scoring hand is a pair of jacks. If a player does not achieve at least a pair of jack or higher, they will lose their bet. 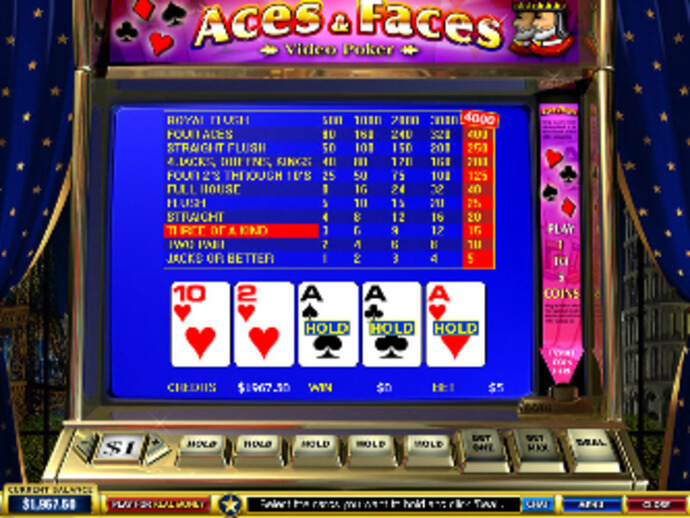 With Aces and Faces online video poker, the game begins with the player placing his or her bet on the table. This can be done by clicking on the bet one or bet max button. The higher the bet on each hand, the bigger the payout if you win the hand. Once the bet has been placed, the player can click on the deal button and the computer will deal the player five cards. The aim of video poker is that same as any poker game. Players must use their cards to try and create the best poker hand possible using the cards they have been dealt.

The main difference in Aces and Faces compared to many other video poker games is the payout structure. The paytable at the top of the screen shows players what they will be paid out for each winning hand. In this game, the lowest paying hand is a pair of jacks followed by two pairs, three of a kind, a straight, a flush, a full house, four of a kind (2’s to 10’s), four of a kind (jacks queens or Kings), a straight flush, four aces and the highest being a royal flush.

In Aces and Faces video poker, once the first round of cards have been dealt, the player can choose to keep or discard any of the cards in their hand. By clicking on the cards themselves, players can keep the cards they want. Players can then click the deal button again and the dealer will replace the discarded cards with new cards from the deck. In video poker as soon as the second hand has been dealt, the computer at echeck casino canada will automatically determine if the player has a winning hand and will pay out accordingly.

This online slots machine game has a vampire theme, and is packed with extra features for players to take advantage END_OF_DOCUMENT_TOKEN_TO_BE_REPLACED

The theme of Enigma HD slots has been likened to an Indiana Jones style adventure. The main background image is END_OF_DOCUMENT_TOKEN_TO_BE_REPLACED

Yggdrasil: The Tree of Life is the title of a unique mobile pokies Australia game from Microgaming. This slot contains END_OF_DOCUMENT_TOKEN_TO_BE_REPLACED